The house in Havana

Someone was waiting for me at the airport to drive me to my guesthouse in Havana. As it was late in the evening, the first thing that struck me was the almost complete darkness of the streets. Old images of the life behind the Iron Curtain in Eastern Europe instantly came to mind, and have continued to return on countless occasions since.

The trip was only smooth at the beginning because the main road from the airport was in good condition, but as soon as we took a turn, it became quite bumpy. My destination was in the old city, and to get there, we had to take a few narrow and muddy streets, where the asphalt was torn up or completely gone, forcing the drivers to navigate through boulders and crater-like potholes. In exchange, that area was a little better lit and seemed a bit more lively, though not necessarily in a positive way. People didn’t appear to be on the streets to have fun or to party, but rather because they had nothing else to do.

At last, I arrived at the place where I was going to stay. It was an imposing house built in the colonial style that characterized most of Havana’s old buildings, with high ceilings, wrought-iron balconies, and wooden shutters for windows. Like most of the surrounding houses, the fallen plaster and scorched paint on the facade made me wonder how many years had passed since the last time it had been renovated, and whether this had happened even before the socialist revolution.

The house had undoubtedly belonged to a wealthy family and had been nationalized by the revolutionaries to be given to people to their liking, following the usual pattern of such regime changes. As a result, it had been modified on the inside and adapted to the cohabitation purposes of the new tenants. As the rooms were originally very large in size, they had been divided by false walls, which thus created additional space to accommodate temporary visitors or guests like me. The living room was shared, as was the kitchen. The furniture was an odd combination of massive pieces that looked as if they had been picked randomly, or were remnants of various sets spoiled a long time ago.

Against that background, the contribution of the current tenants to the decoration of the house was unmercifully striking, in sharp contrast with the original style: the sofas and armchairs were covered with cheap millet, the walls were overloaded with reproductions of modernist paintings, while the dining table hosted the greatest collection of porcelain trinkets that I had seen in my entire life: literally dozens of figurines depicting puppies, kittens, ducks, deer, and unidentifiable species of colored fish. A genuine forest of kitsch objects, displayed right in the heart of that noble house, like a dagger plunged firmly into the chest of the enemies of socialism.

My room had been decorated in the same eclectic, proletarian style, with a pink, fake-satin cover on the plain iron bed and curtains improvised from the same fabric, not long enough to cover more than two-thirds of the windows. Nevertheless, the place was very clean, so I had no reason to complain, and fortunately, the bathroom had been renovated. Despite the obvious mutilation, that house maintained such a strong personality between its robust walls, such generous space under its tall ceilings, and so many secret whispers captured inside its old wooden floors, as if the traces of its previous life, once happy and free, still floated in the air, like a hidden mist, impossible to banish. That feeling of sweet carelessness, which had impregnated the entire house, was downright contagious, to the extent that not even the jungle of hideous trinkets was able to alter it. I would have dreamed of nothing else but to spend my days slowly sipping a coffee on the balcony in the morning, looking at the hustle and bustle of the street, or lying on the couch in the calm, hot afternoons with a Cuban rum and a good book, accompanied by the sound of old-time vinyl records. Time seemed to stand still in that house, together with the privileges and wealth of those who had owned it in its days of glory.

My hosts were a young couple with two children, who lived together with their parents. He was always glum and very expeditious, giving me the impression that he was trying to avoid me, whereas she was a little nicer; however, like him, she seemed to be carrying an invisible, mysterious weight. Whenever I tried to look into their eyes, they looked away, as if they felt guilty about something. I knew that kind of expression only too well – that look askance, never clean, never open. I assumed they were collaborators of the regime, if not even part of the nomenclature. From my standpoint, the fact that they lived in that house, with a computer and internet access, and that they were allowed to receive foreign tourists who traveled independently, like me, raised a lot of questions. I had strong doubts that in Cuba such freedoms were for just anybody. I often tried to tell myself that I might be biased, that the explanation could be different, that the couple could have been tormented for other reasons, such as the fact that they might have had someone sick in the family. But every time I saw that dark, guilty look in their eyes, I don’t know why, but the only thing that came to my mind was: “activists of the Party, protégés of the regime.”

The only person who brought light into that house was the grandmother – a big, chubby Creole with her hair wrapped in a colorful turban, who made me breakfast every day. I think it was only because of her that the spirit of the house was still alive. She was the only one who seemed to care about it. For the others, the house was a source of income and nothing more. Far from being uneducated, they rather seemed to be among those who hated such properties for what they represented, no less than they hated their builders and past owners, and perhaps also the visitors who came from the corrupt Western world to occupy them, on vacation.

Almost every corner, every alley, and every square in Havana offered me a seductive yet desolate image. The old houses, such as the one I lived in, were like courtesans, once beautiful and proud, now impoverished and decayed, left with nothing but regrets for their lost youth. Their graceful columns and balconies had been hijacked for clothes-drying, their once-sumptuous ornaments were all patched, and the lively colors of the facades had been heavily blurred by the weather.  Sometimes, a passing sunray was enough to restore the illusion of their old charm, as if to prove that there was still enough goodness and friendliness in them to please the eye. It was like a caress on the wrinkled skin of a matriarch who had seen and endured much in her life, and raised many children under her roof. 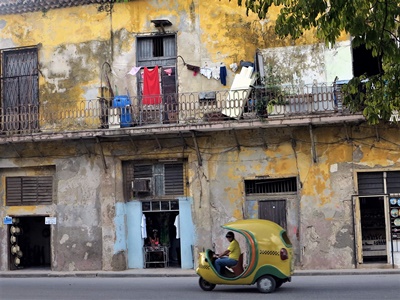 There were very few cars in Havana, at least by the standards of a modern city with a population of similar size. As a result, there was a monumental silence in the streets, like in a sleepy provincial town, or rather as it must have been like more than half a century ago. The American cars abandoned by their owners after the Cuban Revolution had been preserved as carefully as museum items but used continuously until the present. I wouldn’t have wanted to know how many repairs and mechanical improvisations they had actually undergone to retain their appearance. One way or another, in spite of all the shortcomings and the embargo, the Cubans managed to maintain them very well, at least on the outside, to the delight of all visitors. It was not by chance that such cars had been turned into taxis and were in high demand among tourists – especially the convertible ones, painted in light, glossy colors.

Cars on the Streets of Havana

Apart from the fabulous vintage cars, the streets were populated with humble Russian Ladas and tuk-tuks. Newer cars, made in the West, were scarce. For this reason, the general impression was, almost shockingly, that of a film from the 1950s, or rather of a time loop that absorbed visitors in a bygone era.

Because of the permanent sensation of going back in time, the city seemed to be overwhelmed by nostalgia. Between its walls, the main cathedral was still preserving the taste of the end-of-the-world feeling that must have tormented the first missionaries at the thought that they might never see the shores of Europe again. On the Paseo del Prado, one of the main promenade arteries, the amateur artists were hoping in vain to be discovered by a foreign Maecenas who would kidnap them into a better world. And under the setting sun, which was spitting fire on the smoky clouds, the legendary Malecón, the long seaside promenade where the locals used to go out in the evening, looked sad and desolate, with plenty of ruined houses and no terraces or bars. Only the scattered sound of a guitar, which came from a group of young people sitting on the pier, disturbed the sound of the sea waves like a swan song before nightfall. Even the salsa clubs, a real institution in Cuba and a favorite place for parties, dancing, and fun, seemed drowned in melancholy …

A late start on Kilimanjaro